i wasnt really trying to hide my identity at the pcenginefx forum. if you hadnt noticed, orez sivarg is just gravis zero backwards.


getting selection stuff working (at least this far) was more painful than it should have been. it's one of those things i havent worked on before, so it only figures.

Yeah, i hadn't notified that

,excellent.
but others guys on pcenginefx forum, hadn't notified too

i FINALLY got the selection stuff working fully as before was extremely basic. now it's even prettier.

the white lines are fully configurable, they are currently just set to put one space between screen (that info is stored in the file) and the tile palette just splits everything up.

i have the palettes displayed in the "Palette Editor" tab but the behavior needs some work. nothing really edits anything yet but it's getting there!

latest pretty pretty program. note the pretty selection box to the right of the tile palette! 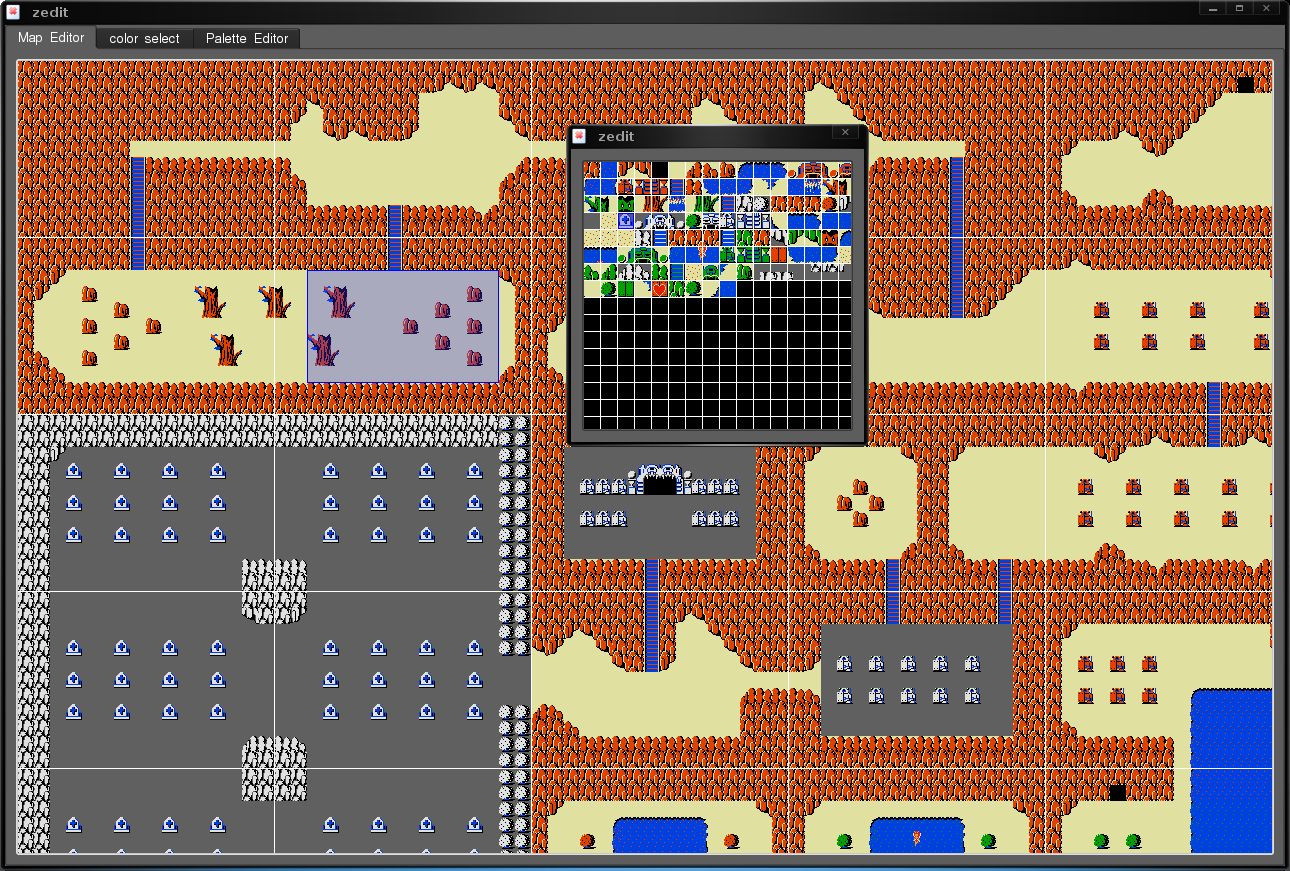 ugh... it took all day to get the stupid scrollbars working... and work properly... without screwing up everything else.

and NOW i can move on to making actual editing work.
Top

editing manually with a "pencil" tool works now. so does the tile selecting with the eyedropper tool. the X clears the selection and the current tile... well, it shows what tile you have selected. i put in a "workspace" thing so that you can work on some stuff then select and drag it to it's final location. im thinking the workspace with be moved and it will become a split screen deal that can be shown and hidden. those waiting for the tiles and sprite editing are going to have to wait a bit longer.

the drag and drop was frustrating me so i moved on to tile and sprite editing. i said i would support 8x8 tiles and they are 100% supported in the app. anyway, i have the basic idea showing and the color selection stuff is working nicely but editing is non-functional. oh, and sprite and tile editing are based on the same widget, so as soon as one works, the other will work without any changes. yeah, the layout looks retarded but you get the idea.

anyway, i've gone a week over the amount of time i was dedicating, so next week there will be significant slowdown on the progress. i'm hoping i can get out a tool that is usable by then.

I'm dreaming about a kind of tool since a long time ago, very nice work !
Top

ok... well i'm putting this on hold early instead of waiting until the end of the weekend because i've hit a bit of problem. basically, im unhappy with the speed (scaling is slow

) because it's all based on software rendering. the good news is that qt has some partial integration of opengl, mostly 2d stuff which is perfect. it's likely it will take a few days to learn to use it smoothly and adapt the current tile render system which is rather centralized thanks to model/view design and having a base view to do the hard work. so yeah, i have to put this aside and work on it only on the weekends because i already have a large project im working on (that i took a break from to do this). it's been a fun 18 days.

the good thing is that i enhanced the existing model that tells info about maps to also feed information about the tiles within the maps as well. with this addition, the main view for can also be used for tile level editing (see map making) as well as pixel level editing (see tile and sprite editing). it's really a good thing because pixel level editing was non-existent even though i had some partially made views. the large benefit from this merged design is that you can edit multiple tiles/sprites at once in drag and drop form (yeah, didnt get that working 100%

) which will be totally cool.

anyway, sorry there isnt anything usable but if you want to play with it or check out the source, have at it because i'm not going to be one of those jerks that makes something interesting that people want and then release absolutely nothing at all.

the default file i use is in there too, so when you run it, it will automatically open it.

sorry but it's going to be a month or so before i can make it into something usable.

Congratulation, you already make a big part of the tool, only hope now you'll finish it one day because drawing for PCE is so difficult.